Artist of the Day - Essie

Essie sprang into action once she realized she could parlay her classically trained voice into the world of indie rock and roll.  Her voice shiver with operatic aria tones. She is at home singing classical music as much as she throws her voice into the ring to sing a Nirvana three part harmony. She is proud to let you know about her West Virginia roots and yes she knows the state bird. Her upbringing surrounded her with music. Starting in the church, she then wrangled her competitive spirit and then moved on to high school singing competitions where she excelled. She said she and a group of friends were noticed for their pipes and she thought they were nerds but "cool nerds" and the "popular" kids liked them. It is  hard not to like Essie who took her name from a play on her name Sarah Riddel.  Her songs are influenced by an interesting mix of artists  including Led Zeppelin Adele, Aretha, Janie and Elton. 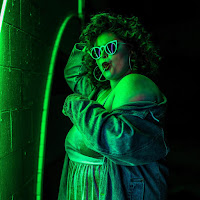 She moved to Princeton to pursue here Masters in Opera. But she quickly became disillusioned with the classics. She was not being disrespectful to the masters when she spread her wings and flew like a free bird into the world of Rock n Roll. A guy friend asked her I she wanted to be in their rock band and with Essie enthusiasm she said "Sure!.   She moved on to being the front woman with her backing band, the Big Chill. Although now she is just Essie, a change her loyal fans aren't used to just yet.  They borough us the fierce sizzling track "Aint Right"in March. Her preivious release "1973" bangs the drum and blasts the guitar. Her classically trained voice soars outlandish directions  with measured restraint.  The song is a bash on the year. She said she and a friend would randomly look events up and it seemed like they all happened in 1973 plus it was a stellar year for classic rock n roll. The rich mix of classical and rock was an easy one for Essie to knit into a colorful musical sweater or a prismatic t - shirt. Either way, she wears it well. 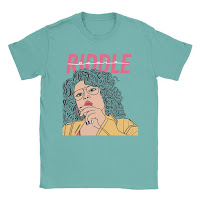 
Following up from our conversation! There's a lot going on and I'll drop it all below but if you need more info please just follow up with questions and I'll be happy to answer!

Upcoming events
10/24 - Bourbon & Branch -  full band - 8 pieces’ w/horns and new original music! I booked this night with the vision of having it be a night of bands fronted by bad ass women so You Do You and Gabrielle Chapman will be opening up the evening!! Link to the tickets below!

I have a new single set to release 10/18! It's a groovy swampy blues track called Stern Fern. It'll be available on all platforms and I'm getting everything lined up for that release! Here's recording of the track (not the exact mixed version for release as this is a little older version) - Stern Fern

So excited for my upcoming WV tour! As I mentioned it will be the first time my WV friends and family will be experiencing Essie Riddle live! Cannot wait! Calling it the Stern Fern Tour and promoting the single as we go. I'll be taking 6 pieces on that journey! We're gonna kick it off with a featured artist spot at World Live Cafe "Rising Star" Open mic 12/3 and we will round off the tour with a homecoming gig at John & Peter's, New Hope on 12/12 with Kyle Sparkman opening up the evening!

The Funk Show I mentioned was so awesome. It was this past August at Snipes Farm in Morrisville, PA. We did a two hour HIGH energy Funk set with a 12-piece band and that included legendary rock and roll hall of famer Michael Hampton, Kidd Funkadelic from P-Funk. Here's a link to footage from that!

So wonderful getting to catch up with you!! Thank you for reaching out and being an all around kick-ass person!

Popular posts from this blog

"The Platform on The Ocean" - Arthur Russell

May 11, 2020
Whenever I think about a cello player I think of someone pristine and stately like Yo Yo ma or Jacqueline Du Pre. Wild haired & squinty eyed,  Arthur Russell pleasantly surprised me. He lived fast & died young in NYC during the AIDS pandemic of the '80s. Hanging with Beat Poets and photographers he was in the IT group. In fact Allen Ginsberg once read poetry while Arthur accompanied him on his cello. Arthur was a sweet ,troubled and tempestuous musical  genius. You can gather that he live the full life for only for only being around 40 years when he succumbed to AIDS which is very strange because this AIDS virus feels like the coronavirus we don't know what's going on so it might be timely to bring that back up the platform of the ocean just stuck struck me as many layered panoply of a song much like the other music record shop there was a little bit of everything in this song there was some electronica there is weird vocals there was a little bit of there
Post a Comment
Read more

All Is Not Fair In Love & Dodgeball

February 13, 2020
“ The mouth of a cannon is safer than the mouth of a woman scorned” Anon Women famously use their heartbreak for artistic fodder and gain Etta crooned that she would rather go blind than see her man with another. PJ questioned "Who the Fuck?" while dancing drunk in her underwear. This petite bad ass was proclaiming “Get out of here, man”. Liz Phair trashes every dude from her past in Guyville. A winning favorite of mine is “6’1” It's cold out there And rough And I kept standing six-feet-one Instead of five-feet-two And I loved my life And I hated you Aimee Mann’s wrath are usually found in her song titles such as “I’m With Stupid”, “Save Me”, & “That’s Just What You Are”. She is famous for skewering her exs - real & imagined. I randomly met the guy, sporting a Dad bod, who was the subject of “Amateur”. He was just a unassuming guitar player who did session work. He told me all these years later he still felt hurt. Words wound. The sh
Post a Comment
Read more

May 21, 2020
Other Music Documentary Other Music, famously located on 4th Street with a view of Tower Records before it folded,was a destination stop for me. The small shop was neatly packed & stacked with the latest & the greatest vinyl records & CDs. This thoughtful, well crafted documentary truly depicts what it was like to be a guest at Other Music. Puloma Basu & Richard Hatch - Miller  clearly took their time to interview the owners, past staff members & the artists who got their start at OM.   Walking into OM always gave me a happy tingle. Watching this documentary evokes a similar feeling. It made me smile as if I was there pawing through the Big Star Category, the Latin flavored music & of course the latest releases. The scene with a composer clutching his hand written review card was priceless. Hearing one of the Berringer brother's bliss out about having a card at OM was a delight. He gushed "That meant the National was a 'real' ban
Post a Comment
Read more